You have to play with a flying robot this Thursday.

This was my greeting early on a Monday back in August when I walked into work. My curiosity was piqued. I mean, that’s not the kind of sentence you hear every day (or every week/month/year/ever for that matter). When Thursday finally came, Xingbo Wang and Natasha Dalal–two former interns at WaveDNA–arrived with what they called a flying drum machine.

The idea is thus: A touch-sensitive quadcopter that sends information to a Linux machine running ROS–the Robot Operating System–that then sends information over a network to a macbook running Ableton Live 9 and Max. Somewhere in this chain, the information is translated to MIDI and fed into an Ableton Live drum rack. The performance is being visualized using Liquid Rhythm.

You can read Xingo’s detailed description of the project here.

Check out the Fast Company article about the flying drum machine here.

For this video, we set up some cameras and I performed a beat overdubbed over two bars. There was a click track playing somewhere, though it was somewhat inaudible underneath the sound of the quadcopter itself. Also, the timing for the performance was tricky: Unlike a keyboard or drum pad where there is a definitive point of touch and release, it’s harder to decide when a quadcopter sends the MIDI data. Is it exactly when you touch it, when it moves the maximum distance it’s going to move based on that touch (to inform velocity), etc. As for the helmet, I guess I watched Terminator movies too many times as a kid and haven’t ruled out robots as future subjugators of our planet.

I asked Xingbo what the motivation for this project was. According to him, “More and more robots are coming to our homes and we need newer and better ways of interacting with them. It would be cool if we could use physical contact to communicate with robots, so thats where this project fits in,” though any excuse to play a flying drum machine seems pretty legit. 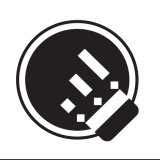